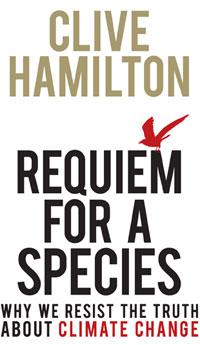 Sometimes facing up to the truth is just too hard. There have been any number of urgent scientific reports in recent years emphasising just how dire the future looks and how little time we have left to act. But around the world only a few have truly faced up to the facts about global warming. This book is about why we have ignored those warnings, so that now it is too late. It is a book about the frailties of the human species: our strange obsessions, our hubris, and our penchant for avoiding the facts. It is the story of a battle within us between the forces that should have caused us to protect the earth, like our capacity to reason and our connection to nature, and our greed, materialism and alienation from nature, which, in the end, have won out. And it is about the 21st century consequences of these failures, and what we can do now. Because we don’t have to take this lying down. ‘Requiem for a Species magnificently captures the idea that by and large, none of us want to believe that climate change is real. It explains our inability to seriously weigh the evidence of climate change, and to take appropriate action to ensure our own survival.’ - Tim Costello, CEO, World Vision Australia ‘Clive Hamilton, as usual, has courageously challenged the current nature of our society in this inspirational new book.’ - Graeme Pearman, former head of the CSIRO Division of Atmospheric Research

To Hamilton, the case is clear cut and the current growth of greenhouse gas emissions will lead to a catastrophic rise in global temperature. Indeed, he argues that even if governments had the political will to act promptly and resolutely – and radically restructured their economies and societies – it may still be too late. He quotes one analysis that claims the world is irreversibly headed for 2.4 degrees Celsius of warming above pre-industrial levels. At that degree of warming, we would lose the Arctic summer sea ice and see the melting of the Himalayan–Tibetan glaciers and of the Greenland ice sheet.

In an earlier book, Hamilton introduced the concept of our growth fetish. It is the developed (and now the developing) world’s addiction to consumption and to economic growth at any cost that has got us into this predicament, he argues. Ironically, says Hamilton, if we took stringent measures to stabilise greenhouse gases over the next 40 years to a level where we may have a chance to survive, then the cost to world GDP in 2050 would be 2%. Reducing atmospheric carbon will not inhibit economic growth; it is the only way to ensure it is sustained.

Hamilton is pessimistic about the world’s ability to introduce measures that would give us a chance; governments are compromised by the pressure of powerful interest groups, such as the coal industry, to emasculate their climate change policies. All political parties are compromised to a greater or lesser degree and the recent experience in Australian politics is a vivid example of this. Hamilton’s book is a sobering one; it will be dismissed as scaremongering by the interests that deny global warning and alarmist by others. If the science is right, then we have little or no time to act.

Hamilton provocatively concludes his book by calling on citizens to break laws that protect those who continue to pollute the atmosphere in a way that threatens our survival.

Affluenza: When Too Much is Never Enough