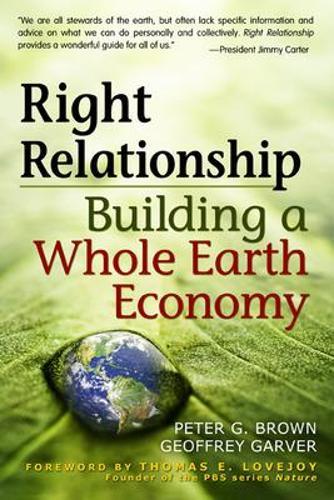 Our current economic system-which assumes endless growth and limitless potential wealth-flies in the face of the fact that the earth’s resources are finite. The result is increasing destruction of the natural world and growing, sometimes lethal, tension between rich and poor, global north and south. Trying to fix problems piecemeal is not the solution. We need a comprehensive new vision of an economy that can serve people and all of life’s commonwealth. Peter G. Brown and Geoffrey Garver use the core Quaker principle of right relationship -interacting in a way that is respectful to all and that aids the common good-as the foundation for a new economic model. Right Relationship poses five basic questions- What is an economy for? How does it work? How big is too big? What’s fair? And how can it best be governed? Brown and Garver expose the antiquated, shortsighted, and downright dangerous assumptions that underlie our current answers to these questions, as well as the shortcomings of many current reform efforts. They propose new answers that combine an acute awareness of ecological limits with a fundamental focus on fairness and a concern with the spiritual, as well as material, well-being of the human race. Brown and Garver describe new forms of global governance that will be needed to get and keep the economy in right relationship. Individual citizens can and must play a part in bringing this relationship with life and the world into being. Ultimately the economy, as indeed life itself, is a series of interconnected relationships. An economy based on the idea of right relationship offers not only the promise of a bountiful future but also an opportunity to touch the fullness of human meaning and, some would say, the presence of the Divine.