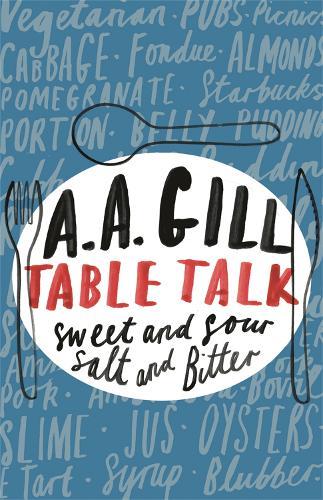 The first collection of food writing by Britain’s funniest and most feared critic A.A. Gill knows food, and loves food. A meal is never just a meal. It has a past, a history, connotations. It is a metaphor for life. A.A. Gill delights in decoding what lies behind the food on our plates: famously, his reviews are as much ruminations on society at large as they are about the restaurants themselves. So alongside the concepts, customers and cuisines, ten years of writing about restaurants has yielded insights on everything from yaks to cowboys, picnics to politics. TABLE TALK is an idiosyncratic selection of A.A. Gill’s writing about food, taken from his Sunday Times and Tatler columns. Sometimes inspired by the traditions of a whole country, sometimes by a single ingredient, it is a celebration of what great eating can be, an excoriation of those who get it wrong, and an education about our own appetites. Because it spans a decade, the book focuses on A.A. Gill’s general dining experiences rather than individual restaurants - food fads, tipping, chefs, ingredients, eating in town and country and abroad, and the best and worst dining experiences. Fizzing with wit, it is a treat for gourmands, gourmets and anyone who relishes good writing.