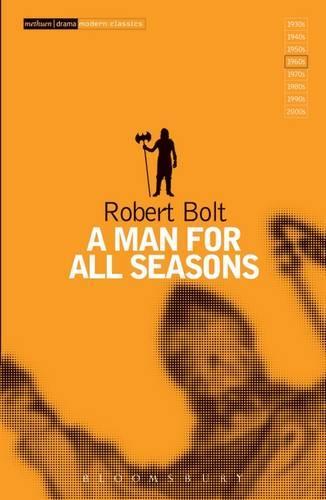 A Man for All Seasons dramatises the conflict between King Henry VIII and Sir Thomas More. It depicts the confrontation between church and state, theology and politics, absolute power and individual freedom. Throughout the play Sir Thomas More’s eloquence and endurance, his purity, saintliness and tenacity in the face of ever-growing threats to his beliefs and family, earn him status as one of modern drama’s greatest tragic heroes. The play was first staged in 1960 at the Globe Theatre in London and was voted New York’s Best Foreign Play in 1962. In 1966 it was made into an Academy Award-winning film by Fred Zinneman starring Paul Scofield. A Man for All Seasons is a stark play, sparse in its narrative, sinewy in its writing, which confirms Mr Bolt as a genuine and solid playwright, a force in our awakening theatre. (Daily Mail)