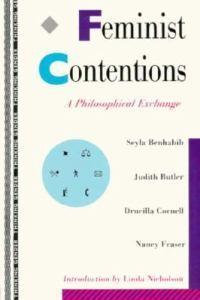 This unique volume presents a debate between four of the top feminist theorists in the United States today. Seyla Benhabib, Judith Butler, Drucilla Cornell and Nancy Fraser discuss some of the key questions facing feminist theory. Each articulates her own position in an initial essay, then responds to the others in a follow-up essay, making possible a conversation between these influential feminist thinkers. Begun as a symposium on the issue of feminism and postmodernism, the volume evolved into a discussion of broader issues such as the usefulness of postmodernism as a theoretical concept; the role of philosophy in social criticism; how historical narrative is best conceptualized; the status of the subject of feminism; and the political effects of different formulations of all these issues. Unlike many collections which assume a given topic and ask various thinkers to respond to it, this format enables the contributors themselves to articulate their own views on the key questions facing feminist theory and distinguish their views from others.