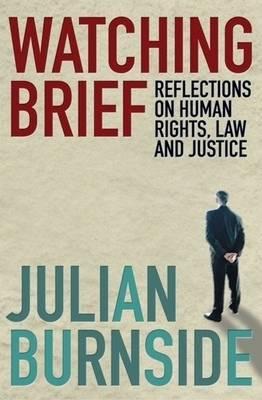 The first decade of the twenty-first century has seen a sharp decline in respect for human rights and the international rule of law. The legal conventions of the new realpolitik seem to owe more to Guantanamo than Geneva.
Australia has tarnished its reputation in the field of human rights, through its support for illegal warfare, its failure to honour international conventions, its refusal to defend its citizens against secret rendition and illegal detention, and its introduction of secretive anti-sedition legislation and draconian anti-terror laws.
In Watching Brief, noted lawyer and human rights advocate Julian Burnside articulates a sensitive and intelligent defence of the rights of asylum-seekers and refugees, and the importance of protecting human rights and maintaining the rule of law. He also explains the foundations of many of the key tenets of civil society, and takes us on a fascinating tour of some of the world’s most famous trials, where the outcome has often turned on prejudice, complacency, chance, or (more promisingly) the tenacity of supporters and the skill of advocates. Julian Burnside also looks at the impact of significant recent cases - including those involving David Hicks, Jack Thomas, and Van Nguyen - on contemporary Australian society.
Watching Brief is a powerful and timely meditation on justice, law, human rights, and ethics, and ultimately on what constitutes a decent human society. It is also an impassioned and eloquent appeal for vigilance in an age of terror - when ‘national security’ is being used as an excuse to trample democratic principles, respect for the law, and human rights.
$26.99Add to basket ›

END_OF_DOCUMENT_TOKEN_TO_BE_REPLACED

The Return: Fathers, Sons and the Land In Between

This Land Is Our Land: An Immigrant’s Manifesto