The Presidency of Andrew Jackson 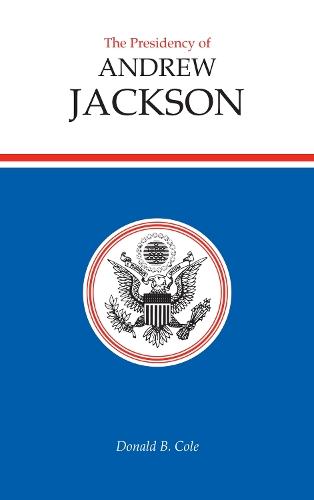 The Presidency of Andrew Jackson

In 1829 Andrew Jackson arrived in Washington in a carriage. Eight years and two turbulent presidential terms later, he left on a train. Those years, among the most prosperous in American history, saw America transformed not only by growth in transportation but by the expansion of the market economy and the formation of the mass political party. Jackson’s ambivalence–and that of his followers–toward the new politics and the new economy is the story of this book. Historians have often depicted the Old Hero (or Old Hickory) as bigger than life–so prominent that his name was wed to an era. Donald Cole presents a different Jackson, one not always sure of himself and more controlled by than in control of the political and economic forces of his age. He portrays Jackson as a leader who yearned for the agrarian past but was also entranced by the future of a growing market economy. The dominant theme of Jackson’s presidency, Cole argues, was his inconsistent and unsuccessful battle to resist market revolution. Elected by a broad coalition of interest groups, Jackson battled constantly not only his opponents but also his supporters. He spent most of his first term rearranging his administration and contending with Congress. His accomplishments were mostly negative–relocating Indians, vetoing road bills and the Bank bill, and opposing nullification. The greatest achievement of his administration, the rise of the mass political party, was more the work of advisers than of Jackson himself. He did, however, make a lasting imprint, Cole contends. Through his strength, passions, and especially his anxiety, Jackson symbolized the ambivalence of his fellow Americans at a decisive moment–a time when the country was struggling with the conflict between the ideals of the Revolution and the realities of nineteenth-century capitalism.