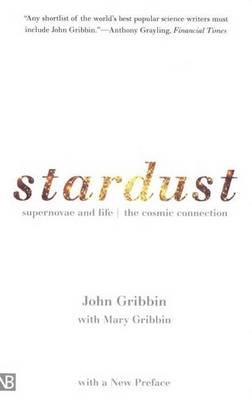 We are made of stardust-and so is all life as we know it. All the chemical elements on earth except hydrogen-including the ones in our bodies-have been processed inside stars, scattered across the universe in great stellar explosions, and recycled to become new stars, planets, and parts of us. In this engrossing book, John and Mary Gribbin relate the developments in twentieth-century astronomy that have led to this shattering realization. They begin their account in the 1920s, when astronomers discovered that the oldest stars are chiefly composed of the primordial elements hydrogen and helium, produced in the birth of the universe in a Big Bang. They then describe the seminal work of the 1950s and 1960s, which unlocked the secret of how elements are cooked by nuclear fusion inside stars. The heart of the story is their discussion of supernovae, only recently understood as great stellar explosions in which the resulting ash is spread far and wide through the cosmos, forming new generations of stars, planets, and people. Focusing on the relationship between the universe and the Earth, the authors eloquently explain how the physical structure of the universe has produced conditions ideal for life.