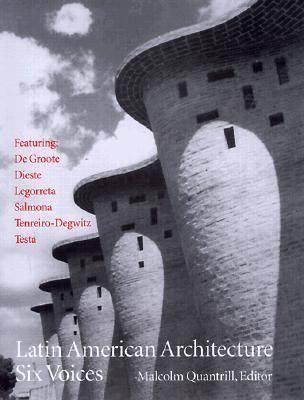 The countries of Latin America exist within a framework of individuality supported by a unity based on the similar factors of urban population, rural morale, and ethnic conformation. The area is isolated even as it is centrally located in geographical terms, almost in a time warp of culture that mixes the modern with the arcane, the elite with the poor, and the primitive with the sophisticated. The common history, common destiny, and common role in the world inherent to the major countries of Latin America-Argentina, Colombia, Chile, Mexico, Uruguay, and Venezuela-justify the efforts of regional architects to create a continental identity. Latin American Architecture: Six Voices is a compilation of profiles of architects, one from each of the six major countries. The essays capture the political and social changes that altered the face of Latin American countries and how the architects who work there continually attempt to balance the old with the new, intimating at the same time the continuity and cultivation of a tradition so persistent in Latin American architecture. In doing so, the artists reveal the two major schools of development: minimalist and tectonic tradition. Michael L. Tribe and Pablo J. Rodriguez P., along with editors Malcolm Quantrill and Kenneth Frampton, focus on prominent figures in Latin American architecture such as Colombia’s Rogelio Salmona, Mexico’s Ricardo Legoretta, and Venezuela’s Jesus Tenreiro-Degwitz. Their intent is to correct an imbalanced treatment of the region’s architecture at the hands of international critics, who lauded Latin America as the proving ground of modernism in the late 1940s but then quickly lost interest. A refreshing look at some less-famous architects, whose skill is equal to if not greater than that of some stars of the developed world, Latin American Architecture provides an ideal introduction for the architecture student or anyone interested in architecture as a reflection of culture.