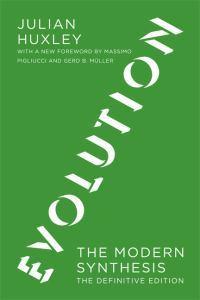 This classic work by Julian Huxley, first published in 1942, captured and synthesized all that was then known about evolutionary biology and gave a name to the Modern Synthesis, the conceptual structure underlying the field for most of the twentieth century. Many considered Huxley’s book a popularization of the ideas then emerging in evolutionary biology, but in fact Evolution: The Modern Synthesis is a work of serious scholarship that is also accessible to the general educated public. It is a book in the intellectual tradition of Charles Darwin and Thomas Henry Huxley–Julian Huxley’s grandfather, known for his energetic championing of Darwin’s ideas. A contemporary reviewer called Evolution: The Modern Synthesis the outstanding evolutionary treatise of the decade, perhaps the century. This definitive edition brings one of the most important and successful scientific books of the twentieth century back into print. It includes the entire text of the 1942 edition, Huxley’s introduction to the 1963 second edition (which demonstrates his continuing command of the field), and the introduction to the 1974 third edition, written by nine experts (many of them Huxley’s associates) from different areas of evolutionary biology.