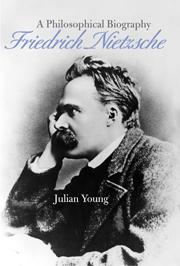 In this beautifully written account, Julian Young provides the most comprehensive biography available today of the life and philosophy of the nineteenth-century German philosopher Friedrich Nietzsche. Young deals with the many puzzles created by the conjunction of Nietzsche’s personal history and his work: why the son of a Lutheran pastor developed into the self-styled ‘Antichrist’; why this archetypical Prussian came to loath Bismarck’s Prussia; and why this enemy of feminism preferred the company of feminist women. Setting Nietzsche’s thought in the context of his times - the rise of Prussian militarism, anti-Semitism, Darwinian science, the ‘Youth’ and emancipationist movements, as well as the ‘death of God’ - Young emphasises the decisive influence of Plato and of Richard Wagner on Nietzsche’s attempted reform of Western culture.