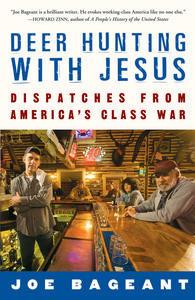 When Joe Bageant returned to his hometown of Winchester, Virginia, he rediscovered his redneck roots -  the great beery, NASCAR-loving, church-going, gun-owning America that has never set foot in a Starbucks. But he soon realised that these were the very people who had carried George W. Bush to victory.
This seemed ironic, because Winchester, like countless American small towns, was fast becoming the bedrock of a permanent underclass - a white ghetto of the working poor in which two in five people do not finish high school, nearly everyone over fifty has serious health problems and little or no health care, and credit ratings are virtually nonexistent. What it adds up to, Bageant argues, is an unacknowledged, American class war from which alcohol, overeating, and Jesus are the preferred avenues of escape.
Deer Hunting with Jesus is a raucous mix of storytelling and political commentary. By turns brutal, tender, incendiary, and seriously funny, it is a potent antidote to what Bageant dubs ‘the American hologram’ - the televised, corporatised, virtual reality that distracts us from the insidious realities of American life.

Have you ever wondered why struggling voters firmly attach themselves to the party and candidate who represents the big end of town, actively voting against their interests? (The answer, says Joe Baegant, lies in revenge.) Joe grew up in Winchester, Virginia - redneck country. His ‘people’ love Jesus, guns, talk radio and cable TV. They work hard for little money, many of them at the local GE or Rubbermaid factories, Wal-Mart or Home Depot. They sign up for astronomical mortgages with dodgy credit companies that don’t rely on credit ratings. These are the people that the Starbucks-sipping, urban middle-class see as ‘angry, warmongering bigots’ and tend to dismiss out of hand.

In this engrossing book, Joe (a left-wing journalist) tells the stories of the average working-class Americans he grew up with and attempts to explain why they think the way they do - and how (small ‘l’) liberals can re-engage with them, as they must if they are to win government again. ‘The left must genuinely connect face-to-face with Americans who do not necessarily share all of their priorities’. That’s what Joe does in Deer Hunting with Jesus - and there’s a message in there for us, too.