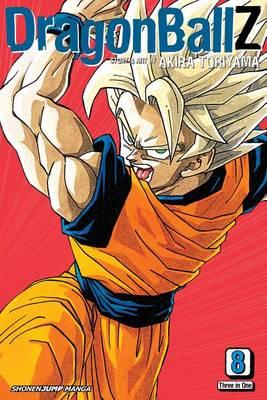 Change your perspective: get BIG After years of training and adventure, Goku has become Earth’s ultimate warrior. And his son, Gohan, shows even greater promise. But the stakes are increasing as even deadlier enemies threaten the planet. DRAGON BALL Z is the ultimate science fiction/martial arts manga. A Collection of Volumes 22 - 24! Kaio-Shin–the Lord of Lords, the mightiest deity in the universe–has summoned Son Goku and pals to try to avert certain doom for the entire universe. A djinn created eons ago by the wicked warlock Bibiddi is about to be resurrected by Bibiddi’s son, Bobiddi. The djinn possesses unfathomable power and is virtually indestructible once unleashed. Even his name strikes fear in the hearts of all humans: Boo! Kaio-Shin leads Goku to Bobiddi’s spaceship, where Boo is gestating until he comes to full power. The crew battles Bobiddi’s minions while the clock is ticking, but Dabra, the king of the demon plane, spots a weakness in their midst that he can easily manipulate: Vegeta’s pride. The former prince of the Saiyans has been waiting impatiently to prove that he is the supreme member of his race–not Goku. Vegeta allows Bobiddi to enter his heart and feed him strength, just as long as that will allow him to finally defeat Goku. Vegeta’s antics give Bobiddi all the time he needs to introduce the universe to its demise: a bouncing baby Boo!