The African Trilogy: Things Fall Apart, No Longer at Ease, and Arrow of God; Introduction by Chimamanda Ngozi Adichie 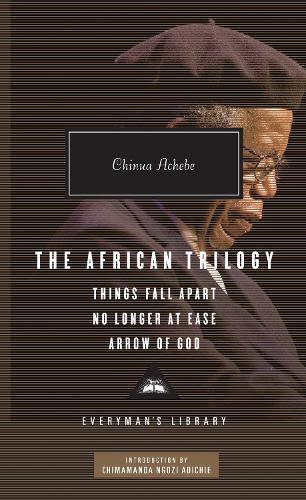 The African Trilogy: Things Fall Apart, No Longer at Ease, and Arrow of God; Introduction by Chimamanda Ngozi Adichie

Here, collected for the first time in Everyman’s Library, are the three internationally acclaimed classic novels that comprise what has come to be known as Chinua Achebe’s African Trilogy -with an intorduction by Chimamanda Ngozi Adichie . Beginning with the best-selling Things Fall Apart-on the heels of its fiftieth anniversary-The African Trilogy captures a society caught between its traditional roots and the demands of a rapidly changing world. Achebe’s most famous novel introduces us to Okonkwo, an important member of the Igbo people, who fails to adjust as his village is colonized by the British. In No Longer at Ease we meet his grandson, Obi Okonkwo, a young man who was sent to a university in England and has returned, only to clash with the ruling elite to which he now believes he belongs. Arrow of God tells the story of Ezuelu, the chief priest of several Nigerian villages, and his battle with Christian missionaries. In these masterful novels, Achebe brilliantly sets universal tales of personal and moral struggle in the context of the tragic drama of colonization.