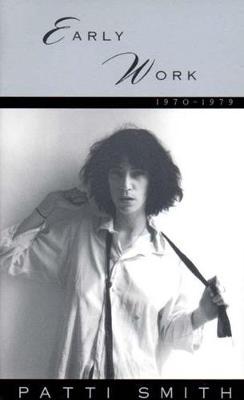 Patti Smith - poet, songwriter, performer. Collected here are selections from Smith’s writings over the decade in which she made a lasting impact on America’s underground scene. Smith’s work evokes the experimentation, the longing, and the desire to break boundaries of those pre-punk days. Early Work: 1970-1979 contains poems and prose from her chap-books Seventh Heaven, Ha! Ha! Houdini! (complete), and Witt, as well as selections from her landmark work Babel. Over one-quarter of the works are previously unpublished, chosen from transcriptions of performance pieces, notebook entries, and the author’s personal papers. In an introduction, Smith places her writing in the context of the seventies, a time when the consequences of leading a life on the edge were less profound. From obscure publications to well-known anthems, Early Work will bring together all the sides of Patti Smith from the meditative to the explosive. With published and unpublished photos by Robert Mapplethorpe, Judy Linn, and others, this raucous volume will remind people of why Patti Smith became a legend.