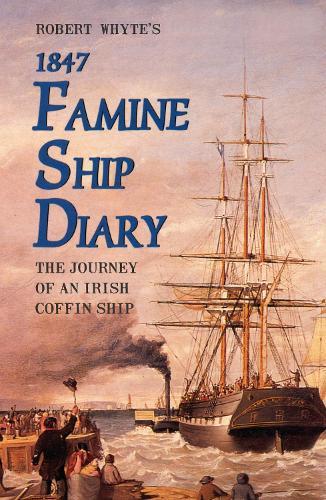 Early on the morning of 20 May 1847, the Bark Ajax weighed anchor in Dublin harbour with 258 passengers on board facing a six-week crossing of the North Atlantic to what they hoped would be a land of promise somewhere in Canada. Vessels constituting what has aptly been called the coffin fleet transported over 100,000 immigrants in panic flight from famine, fever and conditions involving deprivation of all human rights. Greedy captains and shipping agents were responsible for the crowding which resulted in much suffering and enormous loss of life on the ocean. Within a year after landing in Canada one of the passengers of the Ajax published a diary that gives remarkable details about the voyage from Dublin to Grosse Ile, the Canadian quarantine station. The passenger signed his name as Robert Whyte. Whyte was a Protestant gentleman of education and position as well as a professional writer who intended to publish his diary. The diary appeared in print in 1848. It is signed in the author’s own handwriting and features vivid descriptions of the spectacular scenery along the St. Lawrence River and striking delineations of the passengers, including the captain and his wife, the crew and the suffering travellers. The reader cannot but be moved by this vivid and real account of life and death aboard a coffin ship.