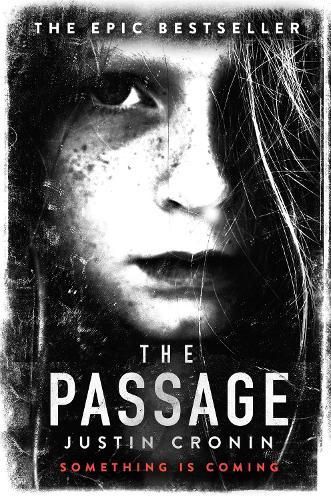 Book 1 of The Passage Trilogy
Amy Harper Bellafonte is six years old and her mother thinks she’s the most important person in the whole world. She is.
Anthony Carter doesn’t think he could ever be in a worse place than Death Row. He’s wrong.
FBI agent Brad Wolgast thinks something beyond imagination is coming. It is.

I’m all about investment. Not the financial kind, despite the fact that The Passage is, at 766 pages, value for money but character investment—where the people you’re reading about become important to you, their hopes and dreams something you are utterly involved in. And with this novel, the first in a now eagerly-anticipated trilogy, I was totally and utterly invested. I was trying to create extra hours in the day where I could read it: balancing it precariously on my knees while I was picking the sultanas out of my muesli, bringing easier lunches to work so I’d have less sandwich-building to do that ate into my reading time, and experiencing excitement instead of dread at the idea of catching public transport.

It’s a tale of journeys, starting with Professor Jonas Lear deep in Bolivia trying to find the rumoured cure for illnesses and old age. When he does, in a bloody and alarming fashion, it starts a new quest—one for people to act as guinea pigs to see if what he has found can be turned into a medication for the human race. FBI agent Brad Wolgast, devastated at the loss of his daughter and subsequent separation from his wife, is sent out to recruit said people, those with no hope for the future and no ties to the past: criminals on death row. When the treatment works—but not as expected—Lear asks for someone younger, a child. When Wolgast is asked to collect a girl called Amy, abandoned by her mother at a nunnery, his conscience gets the better of him. But with the secluded government lab slowly losing control and those infected gaining it, he is running out of time.

Nearly a hundred years later, the world has become very small for one group of people. Peter Jaxon is waiting at the walls of his fortress home to kill the brother he loves, the brother who has been taken by the virals—the monsters the criminals became and turned others into. Virals will always come home, and so Peter waits for his brother, while the village he has lived in all his life starts to disintegrate as time and doubt get the better of them. Someone is certainly coming for Peter, but it is not his brother. For Peter, his journey is just beginning.

While vampires seem a little overdone now after so much media attention, this is an excellent return to original vampiric horror and a perfect example of the genre. Cronin’s beasts are only vampires in a loose sense, as—while they don’t particularly like sunlight, are strong and resilient and do like to consume people, they don’t sleep in coffins—you can’t have a dignified conversation with them and you can’t keep them out of your home simply by not giving them permission to come in. These monsters aren’t sparkling or cuddly—they are horrific creatures and managed to instil genuine thrills of terror into this cynical reviewer. The book is a nail-gnawing narrative of excitement as Wolgast evaluates his options and Peter discovers a world even more large and terrifying than the one he already knows.

Justin Cronin has rendered a simply amazing new world, from Wolgast’s near future (where Dubya’s daughter Jenna Bush is, terrifyingly but unsurprisingly governor of Texas) to Peter’s insular world, full of altered vernacular and a way of living that never leaves the four walls of the compound and is geared solely towards the inhabitants’ survival. The landscape is ravaged by the passing of time and toothy bad guys, and the world is utterly convincing.

I started The Passage apprehensive at the length, and finished it wailing with anger that it wasn’t three times the size. Not unlike Stephen King’s beautifully constructed epic stories like The Stand, I could have lost myself in Cronin’s written words forever. The characters are real and immediate, the story detailed and elaborate without being confusing, the language clear but not simplistic. I can barely wait for the sequels, and just to get more, I’m even looking forward to the Ridley Scott movie adaption on the horizon. Run to get your copy of The Passage like there’s a convicted and infected felon on your tail. It’s simply that good.

The first instalment of the bestselling The Passage Trilogy

The second instalment of the bestselling The Passage Trilogy