Yeats Is Dead!: A Mystery by 15 Irish Writers 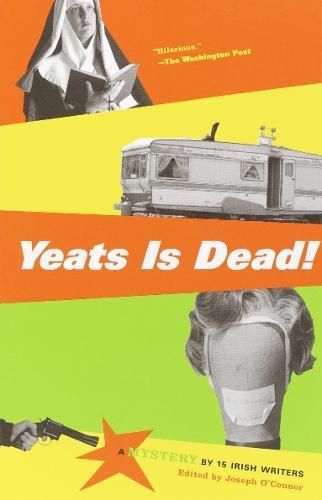 Yeats Is Dead!: A Mystery by 15 Irish Writers

Roddy Doyle, Conor McPherson, Gene Kerrigan, Gina Moxley, Marian Keyes, Anthony Cronin, Owen O'Neill, Hugo Hamilton, Joseph O'Connor, Tom Humphries, Pauline McLynn, Charlie O'Neill, Donal O'Kelly, Gerard Stembridge, and Frank McCourt Fifteen of Ireland’s brightest and most entertaining authors came together to benefit Amnesty International-resulting in this raucous, raunchy, and diabolically entertaining mulligan stew of a novel. Yeats is Dead! is an elaborate mystery centered around the search for something more valuable and precious than anything else in Ireland-an unpublished manuscript by James Joyce. A madcap chase ensues, spiced with the shenanigans of a spectacular array of characters: a sadistic sergeant with the unlikely name of Andy Andrews; a urinal paddy salesman; and the unforgettable Mrs. Bloom, a woman who had tried everything but drew the line at honesty. Gratuitously violent and completely hilarious, Yeats is Dead! is an out-of-control tale of lust and literature that packs big laughs and an even bigger body count.