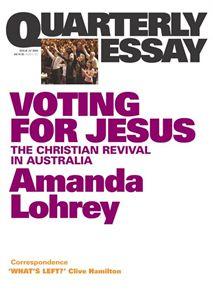 In QE22, Amanda Lohrey looks at the Christian revival in Australia and its effect on our politics and public life. Voting for Jesus explores the world of evangelical Christianity. Lohrey talks to the ground troops - what do they believe and why? She discusses Hillsong, the politics of abortion, the example of Billy Graham and much more. Voting for Jesus also looks at the use and abuse of religion in party politics. Analysing the success of Family First, Lohrey argues that Christians have far less influence than they would like - John Howard uses them when it’s convenient and discards them when it’s not. She discusses George Pell, Peter Jensen and the challenge by the religious right to the secular state. This is an essay that combines political analysis and personal stories in scintillating fashion. Written by one of Australia’s leading essayists, it is sure to stir up debate and command widespread interest.

END_OF_DOCUMENT_TOKEN_TO_BE_REPLACED

'I woke with a gasp. And lay in the dark, open - mouthed, holding my breath. That feeling . . . that feeling was indescribable. For a moment I had felt as if I were falling . . . falling into bliss. All his life, Richard Kline...

Luke and Anna decide on a sea-change. They leave the city, fleeing a past and a future that fill them with fear. On the coast they discover a natural world that is both destructive and rejuvenating. Events sweep them up and they...

Explores the world of evangelical Christianity. It also looks at the use and abuse of religion in party politics. Analysing the success of Family First, Lohrey argues that Christians have far less influence than they would like,...