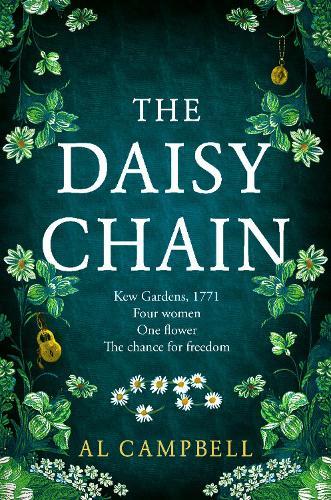 Set in an incredibly exciting period of history, a pacy debut, brimming with adventure and romance. England, 1771: Recently orphaned Daisy Salter moves from quiet Suffolk society to the hustle and bustle of London. A talented botanical illustrator and amateur scientist, frustrated Daisy finds herself governess to the daughter of her sister and brutish noble brother-in-law. However, a chance encounter with pre-eminent scientist Joseph Banks changes everything and, when the extent of her talent is revealed, Daisy not only becomes Artist in Residence at the magnificent Kew Gardens, but confidante of Queen Charlotte, King George III’s wife. But whilst science and plant hunting expeditions are flourishing, at sea the ‘triangular trade’ is in full swing and Daisy is unwittingly inveigled into espionage, tea smuggling and the slave trade. Who is friend and who is foe? Can Daisy work out whom to trust before disaster strikes? AUTHOR: A self-confessed serotonin storyteller, Al Campbell wants the words he writes to make people happy. Writing is both a habit and a hobby originally as an advertising agency creative director and copywriter, latterly as an MA student through flash fiction, short stories and poetry. In common with many creative people Al is dyslexic, something to which he attributes his love of dialogue. This is his first novel.