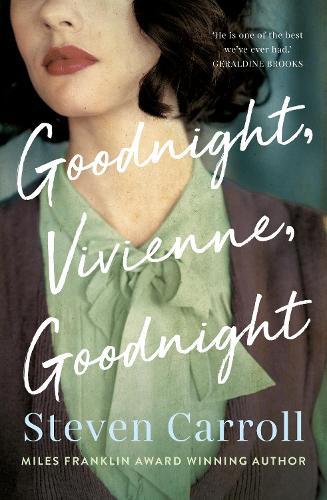 From one of our finest writers - winner of the Miles Franklin, the Commonwealth Writers Prize and the Prime Minister’s Literary Award - comes a wistful and emotional story that imagines a happier ending for the mercurial and complicated Vivienne Haigh-Wood, first wife of the great poet, TS Eliot.
London, June 1940. With help from friends, Vivienne Haigh-Wood, the wife of celebrated poet TS Eliot, is about to effect a daring escape from Northumberland House, the private insane asylum where she has been held for the past four years. Her family, and most particularly her husband, think she’s insane - and maybe she has been, in the past, Vivienne thinks, mad with love, that is, but she is starting to finally feel like herself again.
There is an old law, Vivienne has been told, that if a person can break out of an asylum and stay free for thirty days, proving they can look after themselves, they can’t make you go back. But closing in on Vivienne is the young Detective Sergeant Stephen Minter, a man with a hidden past of his own, who has orders to track her down…
With Goodnight, Vivienne, Goodnight, Steven Carroll completes his critically acclaimed, award-winning and much-loved Eliot Quartet. This novel is a poignant, deeply felt and intensely moving novel of beginnings, endings and reinvention, about the aftermath of a marriage and the reassembling of a broken woman. A delicate dance between what was and what might have been, between fact and fiction, the novel tells a daringly revisionary story of Vivienne - TS Eliot’s first wife, the ‘mad woman in the attic’ - imagining a wholly different and entirely satisfying ending to her story.

This is the final novel in Steven Carroll’s series based on T. S. Eliot’s Four Quartets. Carroll hadn’t intended to write a quartet but after the publication of the first book, The Lost Life, a chance conversation with critic Geordie Williamson at the Brisbane Writers Festival led him to continue the project.

This fourth volume can easily be read as a standalone. It was written during the Covid lockdown and you can feel it in the book, a sense of being enclosed and then set free. The central character is Eliot’s first wife, the highly strung eccentric, Vivienne Haigh- Wood, whose tumultuous relationship with the dour Eliot is abruptly ended when she is committed to a London asylum. For years she languishes in the asylum, obsessed by Eliot and his abandonment of her. Eliot never visits, but one of her few visitors, pharmacist Louise Purdon, becomes convinced of Vivienne’s sanity. This is where Carroll departs from real life to create an achingly beautiful work of fiction.

It is the beginning of the Second World War and London is on edge with news of the war being fought on distant battlefields. The Lunacy Law Reform Society exists to help people wrongfully committed to asylums and advocate on their behalf, making use of a law that states that if a person committed escapes and manages to survive on the outside on their wits, they can be declared sane and freed. With the Society’s help, Vivienne is smuggled out of the asylum and taken to a safe house to wait out her 30 days. As she waits, she reflects on her relationship with Eliot and all her flaws, and his. It was a tempestuous marriage, Vivienne passionate and mercurial, Eliot childlike, out of his depth and withdrawn.

Eliot is now an important figure in English society, so it’s an embarrassment to the establishment that Vivienne has escaped, and political pressure is applied to the police to find her. War veteran Detective Sergeant Stephen Minter, the son of Jewish emigres, is tasked with finding Vivienne. It’s not an assignment he wants; he has read Eliot and Eliot’s antisemitism has sat uncomfortably with him. In his search for Vivienne, Minter comes face to face with Eliot, with his brilliance but also his ambition, inhumanity and aloofness. He starts to feel empathy for the abandoned Vivienne and disdain for Eliot and the British establishment.

This book is a tour de force; I was a few chapters in and I felt compelled to email Carroll to tell him what pleasure his book was giving me and what a beacon it was, shining through the Omicron haze. Though he’s a Miles Franklin winner, Carroll has not always received the attention he deserves; I hope he does with this magnificent work.