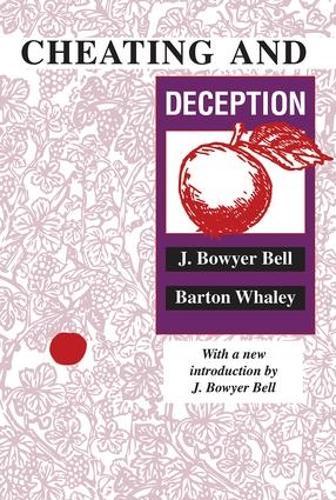 Cheating and deception are terms often used but rarely defined. They summon up unpleasant connotations; even those deeply involved with cheating and deception rationalize why they have been driven to it. Particularly for Americans and much of Western civilization, official cheating, government duplicity, cheating as policy, and conscious, contrived deception, are all unacceptable except as a last resort in response to threat of extinction. As a distasteful tool, deception is rarely used to achieve national interests, unless in relation to the deployment of military force. As an area of study, it has by and large been ignored.Intrigued by attitudes toward cheating and deception, the authors decided to analyze its roots, structure, and process. They asked fundamental questions: are there categories of deception, general steps in the process of deception, and ways to evaluate its results across time and in different modes? The book that results is a typology of kinds of deception, beginning with military deception, but extending into other categories and stages.In his introduction to this new edition, Bell outlines how the book came to be written, describes the mixed emotions toward the subject displayed by govenmental and nongovernmental funding sources, and speculates about its critical and commercial reception. He discusses widespread new interest in the subject, the research that has been undertaken since this book was first published, and its limitations.This book provides a general overview of this complex subject, creating a framework for analysis of specific instances of cheating or deception. It will be of particular interest to political scientists, those interested in military affairs and strategy, and psychologists. The general reader will find the book written with a light touch, drawing examples of cheating and deception in the pursuit of love and money. The specialist reader will be intrigued by its broad-ranging examples drawn from policy and politics, wars and rumors of wars.