Beyond the End of the World 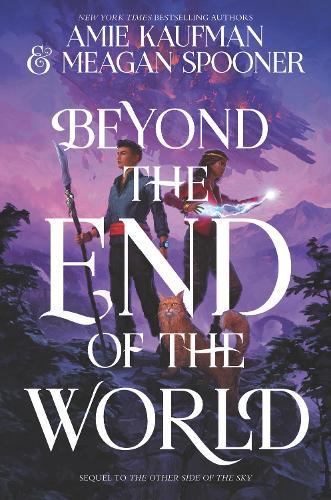 Beyond the End of the World

Perfect for fans of Brandon Sanderson and Laini Taylor, this much-anticipated sequel to New York Times bestselling authors Amie Kaufman and Meagan Spooner’s The Other Side of the Sky is a thrilling race against time–with a tantalizing star-crossed love and an electric conclusion. Time to find a way between worlds. Time to find each other again. Time to do the impossible. Above, in the cloudlands, Nimh has no memory of her past, only an aching, undying certainty that she has left something–someone–behind. But while she struggles to recall her identity, an imposter wields her name with deadly purpose. Below, on the surface, North looks to the sky, desperate to join the person he loves and return to his world. But with only a traitor willing to help him, and others clamoring for him to take Nimh’s place, his home seems more unreachable than ever. Tragedy looms as the cloudland engines falter and mist rains terror on the surface, and in their desperation to reunite and save their people, Nimh and North face one ultimate question: can they defy their love and their destiny to save their homes? Or will the spark between them ignite their worlds, and consume them all together? Praise for The Other Side of the Sky: Amie Kaufman and Meagan Spooner prove they are two living goddesses of writing, creating two compelling worlds with high stakes and gripping emotions. –Sarah Rees Brennan, New York Times bestselling author of the Demons Lexicon trilogy and the Lynburn Legacy series A vivid and compulsive thriller set in a beautiful, perilous world of myths and treachery. You won’t want to put it down. –Laini Taylor, New York Times bestselling author of the Daughter of Smoke and Bone series I was left breathless by the book’s twists and turns, and was unprepared for the ending–it blew me away. Stop everything and read it! –C. S. Pacat, bestselling author of Dark Rise A book that absolutely shimmers with beauty. –Buzzfeed