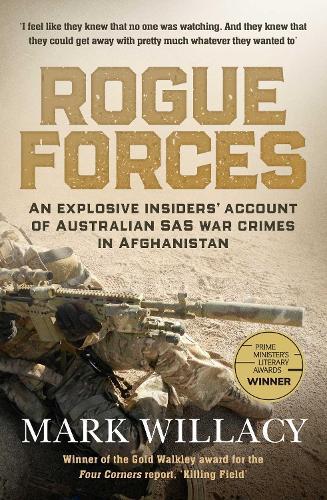 Mark Willacy, who won a Gold Walkley for exposing SAS war crimes, has penetrated the SAS code of silence to reveal one of the darkest chapters in our country’s military history.
Willacy’s devastating award-winning Four Corners program, ‘Killing Fields' captured on film for the first time a war crime perpetrated by an Australian: the killing of a terrified, unarmed Afghan man in a field by an SAS soldier. It caused shockwaves around the world and resulted in an Australian Federal Police war crimes investigation. It also sparked a new line of investigation by the Brereton inquiry, the independent Australian Defence Force inquiry into war crimes in Afghanistan. It was a game changer.
But for Willacy, it was just the beginning of a much bigger story. More SAS soldiers came forward with undeniable evidence and eyewitness testimony of other unlawful killings, and exposed a culture of brutality and impunity.
Rogue Forces takes you out on the patrols where the killings happened. The result is a gripping character-driven story that embeds you on the front line in the thick of the action as those soldiers share for the first time what they witnessed. Willacy also confronts those accused about their sides of the story.
At its heart, Rogue Forces is a story about the true heroes who had the courage to come forward and expose the truth.
This is their story. A story that had to be told.
$35.00Add to basket ›