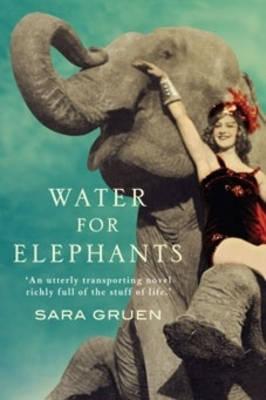 This is a great, glorious, big-hearted novel set in a travelling circus touring the backblocks of America during the Great Depression of the early 1930s. It’s a story of love and hate, trains and circuses, dwarves and fat ladies, horses and elephants - or to be more specific, one elephant, Rosie, star of Benzini Bros Most Spectacular Show on Earth …
When Jacob Jankowski, recently orphaned and suddenly adrift, jumps onto a passing train, he enters a world of freaks, swindlers and misfits in a second-rate circus struggling to survive during the Great Depression.
A veterinary student who almost earned his degree, Jacob is put in charge of caring for the circus menagerie. It is there that Jacob meets Marlena, the beautiful equestrienne who is married to August, a charismatic but violently unpredictable animal trainer. Jacob also meets Rosie, an elephant who seems unmanageable until he discovers an unusual way to reach her.
Water for Elephants is a story that has it all - warmth, humour, poignancy and passion. It has an energy and spirit like the feeling under a big top when the show is about to begin. It is a novel that will win your heart.
$22.99Add to basket ›