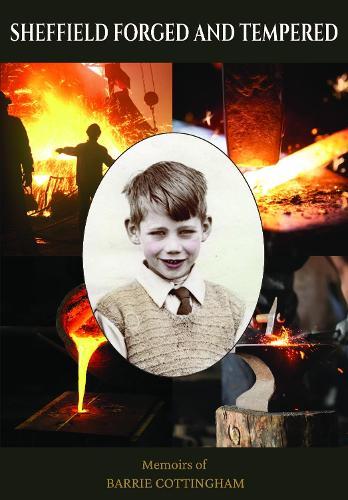 This is a book of memoirs spanning a period of more than 80 years. Born in 1933, the only child of loving working-class parents, the early recollections of Barrie Cottingham are of life in World War Two, and particularly of the Sheffield Blitz, when serious bomb damage to the homes of relatives resulted in a total of 11 family members living together for several weeks in the small terraced property (with no bathroom and only an outside toilet), which his parents rented. These reminiscences are an appropriate introduction to the main stated objective of the memoirs, to provide the author’s Australian born grandsons with some knowledge of their British heritage and ancestors. However, as the recollections unfold, they also give a record of the period from the end of the Second World War when changes in British society (possibly the most rapid ever) provided opportunities for working-class people to move up the social scale. The author completed his state school education at the age of 15, obtaining the best examination results of his year. These, together with a testimonial from his headmaster, resulted in the grant of articles with a small Sheffield firm to study accountancy, without payment of the premium which was normally required at that time. Qualifying at the age of 21 years, he was called up for national service in the Royal Air Force where, after appropriate training, he obtained a commission, the first person from his family to have risen from the ranks. On completion of RAF service, and with a wish to see something of the world, he joined the international accountancy firm of Cooper Brothers & Co (subsequently to become Coopers & Lybrand - the firm ) to spend three years in Kenya. This proved to be one of the most interesting periods of his life. Returning to the firm in the UK at the age of 27, he was admitted to partnership three years later, and subsequently became the youngest member of the Executive Committee (effectively the Managing Board) at the age of 40 - remaining in this management group (with its various changes of name over the years) until the retirement age of 60 years. Following Coopers & Lybrand, he enjoyed a second career, extending over the next 20 years, as a non-executive director on several company boards, including the chairmanship of two public listed groups. The greater flexibility of time when carrying out these duties enabled him to also undertake a number of unremunerated and charitable activities. In relation to one of these, he was awarded an MBE in 2017. However, these memoirs are not confined to a review of the author’s professional, business and charitable activities. Aspects of his private life are interwoven throughout, including the tragic death of his daughter Michelle (suffering from birth with Prader-Willi syndrome) at the age of 35, despite the devoted care of his first wife, Kathleen, his close relationship with his son Nigel, and meeting and marrying his current wife, Nicola. His pride in Sheffield and lifelong interest in sport also receive mention. A Blade for 80 years since first being taken to Bramall Lane by his father as a small boy, he still holds season tickets - although these are of little current value in the days of Covid-19.