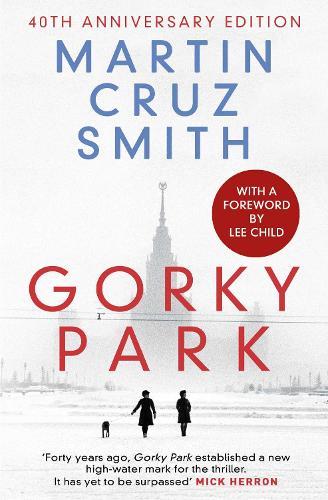 ‘Forty years ago, Gorky Park established a new high-water mark for the thriller. It has yet to be surpassed’ Mick Herron ‘One of the greatest detective novels of the 1980s’ Adrian McKinty SOME CRIMES REFUSE TO BE FORGOTTEN It begins with a triple murder in a Moscow amusement park: three corpses found frozen in the snow, faces and fingers missing. Chief homicide investigator Arkady Renko is cynical about everything except his profession. To identify the victims and uncover the truth, he must battle the KGB, FBI, and the New York City police as he pursues a rich and ruthless American fur dealer. Meanwhile, Renko falls in love with a beautiful, headstrong dissident for whom he may risk everything … READ THE NOVEL THAT INSPIRED A GENERATION ‘One of the seminal books in the canon of crime fiction’ Abir Mukherjee ‘Gorky Park remains a dazzling and incisive portrait of a terrifying political regime’ Kate Rhodes ‘A rich sumptuous feast of a novel, the sort of book you want to immerse yourself in’ Russ Thomas ‘A sumptuous and chilling depiction of life and lies in the Soviet Union’ Rory Clements ‘Gorky Park was my first real introduction to the immense possibilities of the crime novel as work that truly transcends its genre’ Jacob Ross ‘An urgent, contemporary game changer forty years ago, now a historical classic’ Martyn Waites ‘One of the greatest crime novels ever written’ Tim Baker ‘A timeless thriller … Cruz-Smith delivers an absolute masterclass in tension’ Caz Frear ‘A true masterpiece’ Rod Reynolds ‘Simply, why the thriller genre must exist. Brilliant’ Chris Hauty ‘Martin Cruz Smith is the master and Gorky Park is his masterpiece’ William Ryan