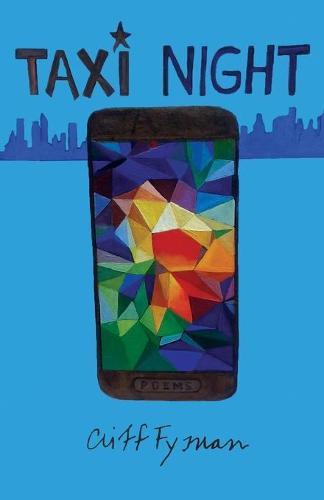 Cliff Fyman’s Taxi Night is a splendid and powerful book-length poem in four parts. The real-life patter and ambience of his fares reach the hackie, Fyman, as he transports a rainbow cast of denizens around the boroughs from 5 p.m. until 5 a.m. The first two sections are transcribed from overheard cellphone combat, or a jiving fare who tries to play Fyman verbally, or more than a few nutcases. But Fyman’s show is the farthest thing from a freak show. Each appearance at the mike, so to speak, is brief. Fyman presents the words he captures in precisely sculpted form, ingenious line breaks, one word lines - from-the-gut poems which retain a credible verbatim and are rigorously artful. Eloquence in their realism. The last two sections increasingly are transcribed from Fyman’s own silent, deeply inner verbatim. These pieces are equally Swiss-movement poems. Vibrant slices of anonymous lives rendered with a dramedy of depth and compassion. A moving celebration of whatever we become when we buy a ride and take to the backseat stage. -JOHN GODFREYTaxi Night is strong and clear like an ink drawing with bold lines that are few and stark but tell the whole story, the place and time, the people, how they think and speak, the music of it, a documentation of the undocumented, simultaneously very close and very far, which is how people are. -TANIA SUSSKINDThere’s no better place to view the human condition than the driver’s seat of a New York City cab. Just ask poet Cliff Fyman, who has transformed his stint behind the wheel into Taxi Night, a touching, sometimes mind-blowing work. Through lovingly handled found material; curious diction; and acute, sometimes deadpan observation, Fyman gives the reader all the drama, humor and pathos that comes from a steady stream of humanity in the backseat. He has an excellent ear for everyday speech and the sharp editing skills of a top-notch documentarian. Read Taxi Night slowly or breathlessly. Read it all the way through or read it in bits. Either way, you’re in for a great ride. -PETER BUSHYEAGER Dude, they are pure gold! They capture the upper class in unguarded moments. Yr bits are the highlight of my day! -RON KOLM