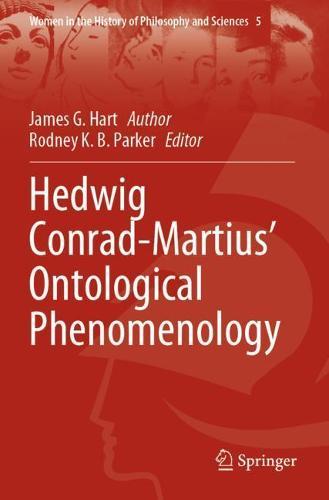 This work is an introduction to the totality of the metaphysical philosophy of nature of Hedwig Conrad-Martius (1888-1966). Her own training and inclination as a realist phenomenologist enables a unique perspective on central issues in modern and contemporary (twentieth century) theoretical biology and physics. Here we find novel theories of, e.g., space and time, as well as development and evolution. This work is thus of interest to anyone studying the history of the phenomenological movement as well as religious cosmology. The philosophical basis for this cosmology is Conrad-Martius' realontology which is a phenomenological account of the essence of appearing reality. The full elaboration of the modes of appearing of what is real enables the unfolding of an analogical theory of selfness within the order of nature culminating in an account of the coming to be of humans, for whom there is an essentially distinctive world- and self-manifestation for which she reserves the term spirit. Key to her position is the revival of ancient metaphysical themes in new transformed guises, especially potentiality and entelechy. Nature’s status, as a self-actuation of world-constituting essence-entelechies, places Conrad-Martius in the middle of philosophical-theological discussions of, e.g., the hermeneutical mandate of demythologization as well as the nature of evolution. Of special interest is her insistence on both nature’s self-actuating and evolving powers and a robust theory of creation.