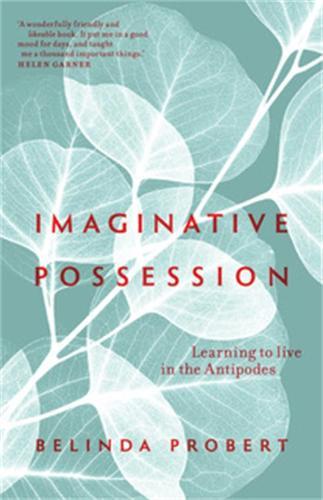 Wondering how migrants can fully settle on this ancient continent, Belinda Probert bought a property in the “country” to observe things more closely and learn to garden differently.
At a time when many easy assumptions about how we live and how our society functions are being questioned there is room for contemplation of a country that is ancient, occupied for at least sixty thousand years, and young, a national federation for only twelve decades.
Belinda Probert, a migrant from England, sets out to question in words and action how well she understands the landscapes she has seen and the people that have shaped them. She takes with her a set of writers who have asked the same questions, or provided interpretations of our sense of belonging, to test their words against her own emerging views. Wondering how a nation of immigrants can fully settle here she decided she needed to buy a property in the ‘country' so she could observe it more closely, and learn to garden differently. Trees fell on her, ants bit her, bowerbirds stole her crops, but from the exercise she discovers much more about soil, trees, water, animals and protecting herself from fire emergencies. Driving back and forth she learns to see the ancient heritage all around us, and rural industries that have destroyed and created so much.

Upswell Publishing is a new not-for-profit imprint created by Terri-Ann White, former director and publisher at UWA Publishing. In her mission statement, White writes that she is ‘interested in books that elude easy categorising and work somewhat against the grain of current trends’. Imaginative Possession is one of the first books to be released under this imprint. Its author, Belinda Probert, is a social scientist and academic, having held such senior positions as Dean and Deputy Vice-Chancellor across various Australian universities throughout her career.

In the 1970s, at the age of 26, Probert moved from the English countryside where she had grown up, to the blinding sunlight and endless blue skies of Western Australia. As the years went by, she lived in both Perth and Melbourne, became a citizen, had children but never felt entirely at ease in the Australian landscape. On her 62nd birthday she bought 28 acres of land in the Otway Ranges in Victoria and this book reconciles her struggle to feel connected with the land she now occupies.

Although gardening is her passion and hobby, her goal is not to merely plant an array of indigenous species but to try and deeply understand as much as she can about the landscapes around her ‘with all their history of dispossession, clearing and felling and grazing and planting, as well as remnant “nature”’. In her quest for knowledge, Probert reads widely, including the work of Bruce Pascoe, Don Watson, Bill Gammage and Kim Mahood, trying to understand her own haphazard experience of living in the ‘country’. The result is a book of quiet personal introspection told with humour and self-deprecation. Probert has learned so much and is keen to share this with her readers. Her style is enormously approachable, and her writing is vibrant and compelling. Happily, Upswell Publishing saw a place for this kind of writing, and as readers, we are richer for sharing in the experience.

END_OF_DOCUMENT_TOKEN_TO_BE_REPLACED

My Mess Is a Bit of a Life: Adventures in Anxiety