The Devil’s Playbook: Big Tobacco, Juul, and the Addiction of a New Generation 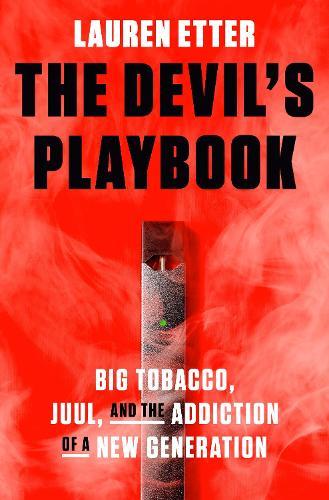 The Devil’s Playbook: Big Tobacco, Juul, and the Addiction of a New Generation

Big Tobacco meets Silicon Valley in this deeply reported and illuminating (The New York Times Book Review)corporate expose of what happened when two of the most notorious industries collided-and the vaping epidemic was born. The best business book I’ve read since Bad Blood. -Jonathan Eig, New York Times bestselling author of Ali- A Life Howard Willard lusted after Juul. As the CEO of tobacco giant Philip Morris’s parent company and a veteran of the industry’s long fight to avoid being regulated out of existence, he grew obsessed with a prize he believed could save his company-the e-cigarette, a product with all the addictive upside of the original without the same apparent health risks and bad press. Meanwhile, in Silicon Valley, Adam Bowen and James Monsees began working on a device that was meant to save lives and destroy Big Tobacco, but they ended up baking the industry’s DNA into their invention’s science and marketing. Ultimately, Juul’s e-cigarette was so effective and so market-dominating that it put the company on a collision course with Philip Morris and sparked one of the most explosive public health crises in recent memory. In a deeply reported account, award-winning journalist Lauren Etter tells a riveting story of greed and deception in one of the biggest botched deals in business history.Etter shows how Philip Morris’s struggle to innovate left Willard desperate to acquire Juul, even as his own team sounded alarms about the startup’s reliance on underage customers. And she shows how Juul’s executives negotiated a lavish deal that let them pocket the lion’s share of Philip Morris’s $12.8 billion investment while government regulators and furious parents mounted a campaign to hold the company’s feet to the fire. TheDevil'sPlaybook is the inside story of how Juul’s embodiment of Silicon Valley’s move fast and break things ethos wrought havoc on American health, and how a beleaguered tobacco company was seduced by the promise of a new generation of addicted customers. With both companies' eyes on the financial prize, neither anticipated the sudden outbreak of vaping-linked deaths that would terrorize a nation, crater Juul’s value, end Willard’s career, and show the costs in human life of the rush to riches-while Juul’s founders, board members, and employees walked away with a windfall.