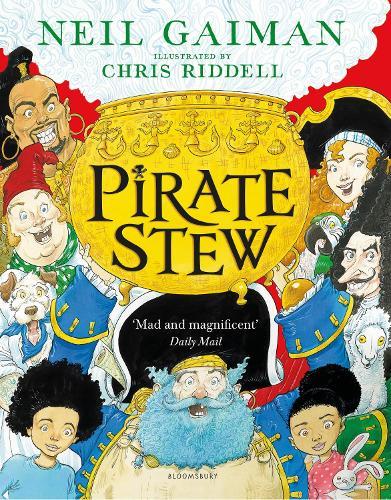 From the multi-award-winning Neil Gaiman comes the biggest picture book of the year: a joyfully riotous, brilliantly anarchic, deliciously rhyming adventure, with glorious piratical illustrations by Chris Riddell ‘Neil Gaiman is the nearest thing children’s books have to a rock star: if you enjoy fantasy, he is irresistible’ The Times Meet LONG JOHN McRON, SHIP’S COOK … and the most unusual babysitter you’ve ever seen. Long John has a whole crew of wild pirates in tow, and - for two intrepid children - he’s about to transform a perfectly ordinary evening into a riotous adventure beneath a pirate moon. It’s time to make some PIRATE STEW. Pirate Stew! Pirate Stew! Pirate Stew for me and you! Pirate Stew, Pirate Stew Eat it and you won’t be blue You can be a pirate too! Marvellously silly and gloriously entertaining, this tale of pirates, flying ships, donut feasts and some rather magical stew is perfect for all pirates, both young and old. With a deliciously rhyming text from master storyteller Neil Gaiman, and spellbinding illustrations by the supremely talented Chris Riddell, three-times-winner of the Kate Greenaway Medal, this is the picture book of the year! Joyful, quirky and action-packed, it makes a spectacular and magical gift.