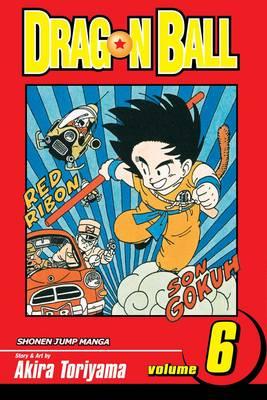 Eath’s greatest hero…is from outerspace! Dragon Ball introduces a young monkey-tailed boy named Goku (a wry update of the classic Chinese Monkey King legend), whose quiet life changes when he meets a girl named Bulma who is on a quest to collect seven Dragon Balls. If she gathers them all, an incredibly powerful dragon will appear and grant her one wish. But the precious orbs are scattered all over the world, and Bulma could use the help of a certain super-strong boy… (In Japan, Dragon Ball and Dragon Ball Z were originally a single 42-volume series. VIZ Media’s Dragon Ball contains vols. 1-16 of the original Japanese Dragon Ball, from the beginning of the series to the climax of Goku’s last fight with Piccolo.) In the frozen north, Goku’s one-man fight against the Red Ribbon Army continues as he storms the perilous Muscle Tower! Can he defeat General White’s squad of ninjas, cyborgs, and worse, and save the peaceful people of Jingle Village from their oppressors? Then, Gorku travels to the City of the West to visit his old friend Bulma, who joins him on his quest, bringing her latest inventions. Their quest for the next Dragon Ball takes them around the world to a jungle island in the South Seas…but to get THIS Dragon Ball they’ll have to go through General Blue!