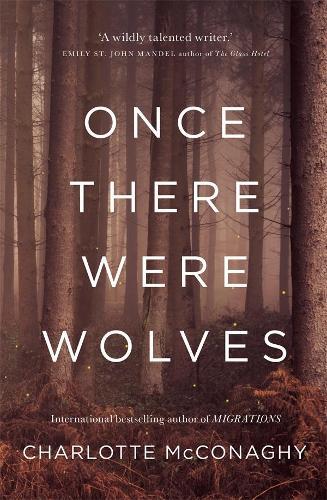 Inti Flynn arrives in Scotland with her twin sister, Aggie, to lead a team tasked with reintroducing fourteen grey wolves into the remote Highlands. She hopes to heal not only the dying landscape, but a broken Aggie, too. However, Inti is not the woman she once was, and may be in need of rewilding herself.
Despite fierce opposition from the locals, Inti’s wolves surprise everyone by thriving, and she begins to let her guard down, even opening up to the possibility of love. But when a local farmer is found dead, Inti knows where the town will lay blame. Unable to accept her wolves could be responsible, she makes a reckless decision to protect them, testing every instinct she has.
But if her wolves didn’t make the kill, then who did? And what will she do when the man she’s been seeing becomes the main suspect?
Propulsive and spellbinding, Once There Were Wolves is the unforgettable tale of a woman desperate to save the creatures she loves. Part thriller, part redemptive love story, Charlotte McConaghy’s profoundly affecting novel will stay with you forever.

A timely meditation on humanity’s place in the natural world and a swan dive into the dark ripples of domestic violence, Charlotte McConaghy’s latest novel is both a deep breath of fresh forest air and the harsh drag of a first cigarette.

Raised alongside her twin by a cynical detective mother and a bleeding-heart environmentalist father, Inti Flynn has grown into a hard, brooding, unapproachable woman, caring only for her wolves and her sister, Aggie, who is often trapped in her own waking nightmares. It was not always this way: in the past, Inti was the sick, sensitive twin, with Aggie as her protector.

Newly arrived in Scotland, with Aggie in tow, Inti leads a team tasked with reintroducing 14 wild wolves into the Highlands to reboot the local habitat. Her mission, however, is met with active outrage and misplaced terror from the locals. Much like the fierce, independent wolf Number Ten, who has a concerning lack of sensible fear when it comes to humans, Inti’s distrust of people is only matched by her refusal to let them intimidate her.

Against the backdrop of wintry pines, an unsolved murder, and a reluctant yet irrepressible blossoming romance with the local chief of police, we come to learn through flashbacks how sensitive Inti and brave Aggie’s situations have been shaped by the the ongoing ripple effects of human cruelty: ‘If you truly think wolves are the blood spillers, then you’re blind. We do that. We are the people killers, the children killers. We’re the monsters.’

This bare-your-teeth, feminist thriller contains difficult scenes that challenge you not to look away, but there’s also a thawing warmth, redemption through empathy, and a haunting glory of the wild in all things. Threaded through with darkness, Once There Were Wolves is a reminder that the light at the end is well worth life’s inevitable tunnels.