The Women of Little Lon 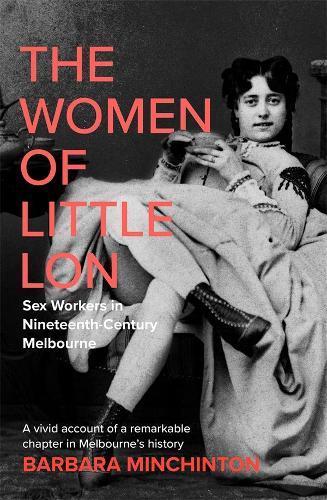 The Women of Little Lon

Sex workers in nineteenth-century Melbourne were judged morally corrupt by the respectable world around them. But theirs was a thriving trade, with links to the police and political leaders of the day, and the leading brothels were usually managed by women.
While today a popular bar and a city lane are famously named after Madame Brussels, the identities of the other ‘flash madams', the ‘dressed girls' who worked for them and the hundreds of women who solicited on the streets of the Little Lon district of Melbourne are not remembered.
Who were they? What did their daily lives look like? What became of them? Drawing on the findings of recent archaeological excavations, rare archival material and family records, historian Barbara Minchinton brings the fascinating world of Little Lon to life.

If I asked if you knew about Madame Brussels, I’d forgive you for responding: ‘oh, the rooftop bar at the Spring Street end of Bourke Street, where the staff used to get around in tennis whites?’. Usually, you’d be right, but right now, I’m referring to Caroline Hodgson, successful, independent business owner and property mogul. And yes, she ran a rather posh brothel of that name.

Barbara Minchinton’s new book lays bare the identities of the various brothel madams and sex workers from colonial-era Melbourne through to the Gold Rush boom, reclaiming their fascinating stories from the moralists’ rubbish bin. There were many successful and independent women like Hodgson, including Sarah Fraser, Annie Britton and Sarah Saqui. Though not all were brothel owners, these women operated amid the thriving sex work industry in the Little Lon precinct. Stemming from recent archaeological digs of the area and solid primary research, Minchinton illuminates this district for the reader, bringing to life the colour and character of the Little Lon community.

Back then, these women had freedom, some clout and largely good relationships with police and politicians, many of whom frequented these establishments. When the demise of Little Lon came in 1907 – at the hands of conservative moralists who lobbied the government to outlaw the industry – sex work in Melbourne was pushed underground, and in time, linked to other illicit pursuits. More than a hundred years later, a bill is before the state government to decriminalise the industry.

Like Hallie Rubenhold’s Baillie Gifford Prize-winning The Five, The Women of Little Lon overturns many prevailing attitudes and lurid fallacies of the age to reframe the lives of these women with great results. This is a highly readable history peppered throughout with fantastic anecdotes, transcribed newsprint articles of the period, as well as archival documents. A worthy addition to any history-lover’s bookshelf.