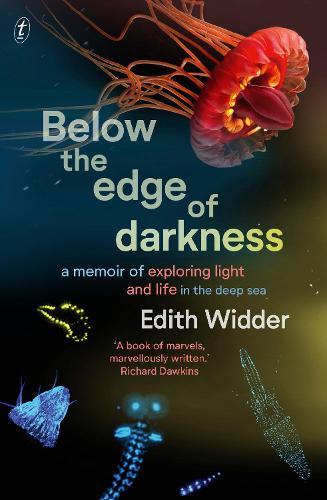 Edith Widder grew up wanting to become a marine biologist. But after complications from surgery caused her to go temporarily blind while at university, she became fascinated by light, and her focus turned to bioluminescence. On her first visit to the deep ocean, in an experimental diving suit that took her to a depth of 250 metres, she turned off the suit’s lights and witnessed breathtaking explosions of bioluminescent activity. Why was there so much light down there?
Below the Edge of Darkness takes readers deep into the mysteries of the oceans as Widder investigates one of nature’s most widely used forms of communication. She reveals hidden worlds and a dazzling menagerie of creatures, from microbes to leviathans-many never before seen or, like the giant squid, never before filmed. Alongside Widder, we experience life-and-death equipment malfunctions, and breakthroughs in technology and understanding, set against a growing awareness of the deterioration of the world’s largest and least understood ecosystem.
This engaging memoir, imbued with optimism and a sense of wonder, is an adventure story as well as a science story. Edith Widder shows us how exploration is the key to conserving the oceans-and our future on this planet.
$34.99Add to basket ›