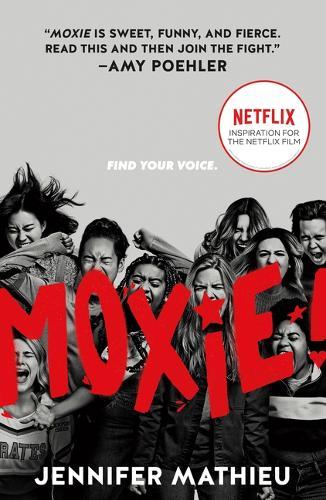 Now a Netflix Original Film directed by Amy Poehler! Moxie is sweet, funny, and fierce. Read this and then join the fight.–Amy Poehler An unlikely teenager starts a feminist revolution at a small-town Texas high school in this novel from Jennifer Mathieu, author of The Truth About Alice. MOXIE GIRLS FIGHT BACK! Vivian Carter is fed up. Fed up with an administration at her high school that thinks the football team can do no wrong. Fed up with sexist dress codes, hallway harassment, and gross comments from guys during class. But most of all, Viv Carter is fed up with always following the rules. Viv’s mom was a tough-as-nails, punk rock Riot Grrrl in the ‘90s, and now Viv takes a page from her mother’s past and creates a feminist zine that she distributes anonymously to her classmates. She’s just blowing off steam, but other girls respond. As Viv forges friendships with other young women across the divides of cliques and popularity rankings, she realizes that what she has started is nothing short of a girl revolution. Moxie is a book about high school life that will make you wanna riot! Also by Jennifer Mathieu: The Truth About Alice: A powerful look at slut-shaming, told through the perspectives of four small-town teens, about how everyone has a motive to bring–and keep–a teen girl down. Devoted: A girl with a controlling, conservative family realizes that her life is her own–if only she can find the courage to fight for it. Afterward: A tragic kidnapping leads to an unlikely friendship in this novel about finding light in the midst of darkness. Praise for Moxie: With a story that’s equal parts heart and instruction manual, Mathieu has captured the movement of a generation–warts and all–and shone a light forward for the next one. –E. K. Johnston, #1 New York TimesBestselling author of Exit Pursued By a Bear