Oh, What a Lovely Century 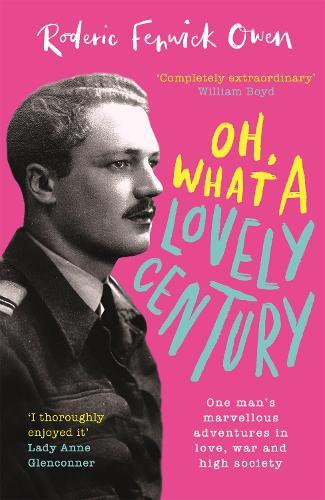 Oh, What a Lovely Century

‘I would be most unhappy to think that any part of this memoir should be cut on grounds of 'decency’, for those bits are essential…‘

So begins the lively true story of aristocrat and travel writer Roderic Fenwick-Owen. Born in 1920, Fenwick-Owen had an extraordinary life, which careered between some of the biggest moments in history and took him to the ends of the earth, meeting (and even living with) some of the 20th Century’s most well-known people along the way, including Eisenhower, Jackson Pollock and Marlene Dietrich.
After eye-opening schoolboy exploits with his classmates Christopher Lee and Queen Elizabeth II’s cousin (whilst his father ran away with the family’s nanny), Roderic spent the 1930s trying to fit in at Eton and Oxford and getting into various mischief all the while. In the summer of 1939, he witnessed Nazi Germany when he went to stay with a friend, and only managed to get home the day before war broke out. He served first in the ambulance service in the north of England and then in air raid shelters during the Blitz, before joining the RAF and being stationed in Italy. In the years afterwards he travelled far and wide, was briefly married to a Tahitian princess and became the court poet to Sheikh Shakhbut in Abu Dhabi. Dripped throughout his life are his numerous and passionate love affairs with both men and women, and the effects the decriminalisation of the former had on his happiness.
Oh, What a Lovely Century is a marvellous obituary of an ever-changing and now lost world, that was frequently the best of times, and sometimes the worst.
$32.99Add to basket ›