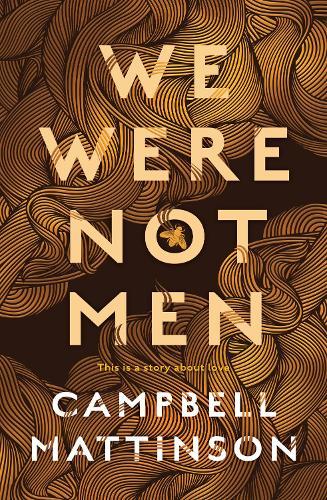 ‘We were sons, we were brothers. I didn’t know how to be either.’

This is a story about love. About the love that nine-year-old twins Jon and Eden Hardacre have for their mum, for the creek that they swim in, for each other - this is the love that they trust, that’s clear and pure as sunlight, as honey, as water.
But in the wake of a terrible accident, the boys have to grow up fast. They compete with each other to make the Olympic Games swimming squad, fall in love with the same girl, and begin to realise how complicated love can be and how it doesn’t always show itself in the ways that we expect.
Heart-hammeringly original, intense and deeply moving, We Were Not Men is a powerhouse of a novel about all the various faces that love shows us and how sometimes, distracted by life, ambition or attraction, we take it for granted until it’s too late - or almost too late. An unforgettable novel that pulses with grief, revelation, hope and love.

Campbell Mattinson’s first novel is likely to make a Boy Swallows Universe- sized splash in the Australian literary scene. Mattinson’s publisher has defied anyone to read the first 22 pages and then try to put the book down. I took the challenge and found myself absorbed in a big-hearted, deeply moving and immensely satisfying novel.

We Were Not Men begins with a shocking accident and then moves back and forth between Newport in the western suburbs of Melbourne and Flowerdale in regional Victoria. It stars Jon and Eden Hardacre – twin brothers who are nine years old as the novel begins – and their grandmother Bobbie, who explains to them very early on, ‘you have to understand that I’m frightened of children’.

We Were Not Men will have you falling a little bit in love with its cast of broken and superbly drawn characters. Grandma Bobbie, in particular, is a simply wonderful character whose snappy, dark, yet spot-on home-spun philosophies are sprinkled throughout the novel. She believes that what we do in life is ‘get up, get jealous, get drunk and go to bed’, and teaches the boys that ‘every day we lose a little bit of something’.

Through Jon’s eyes we witness his and Eden’s rapid journey into adulthood. Though Jon feels deeply connected to his twin, the two boys are different, and as they get older, the cracks between them widen. They become exceptional swimmers, finish primary school, train for the Olympics, fall in love, begin secondary school, compete against each other, leave each other behind and catch up with each other again.

Mattinson is a wine writer who previously earned high praise for his remarkable 2015 biography, The Wine Hunter. We Were Not Men, his first novel, has taken 30 years to write. I expect him to abandon his day job and begin crafting his second novel any day now – we can’t wait another 30 years for this exciting new voice to resurface.

Lou Ryan is the manager at Readings Carlton.