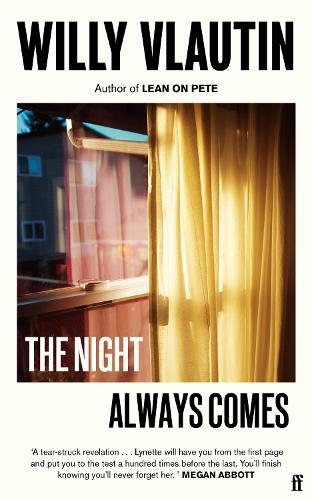 Between looking after her brother, working two low-paid jobs, and trying to take part-time college classes, Lynette is dangerously tired. Every penny she’s earned for years, she’s put into savings, trying to scrape together enough to take out a mortgage on the house she rents with her mother. Finally becoming a homeowner in their rapidly gentrifying Portland neighbourhood could offer Lynette the kind of freedoms she’s never had. But, when the plan is derailed, Lynette must embark on a desperate odyssey of hope and anguish.

Written with all Willy Vlautin’s characteristic and heart-wrenching empathy, The Night Always Comes holds up a mirror to a society which leaves too many people only a step away from falling between the cracks.
‘The straightforward beauty of Vlautin’s writing, and the tender care he shows his characters, turns a story of struggle into indispensable reading.’ - Ann Patchett
‘Vlautin is one of the bravest novelists writing … An unsentimental Steinbeck, a heartbroken Haruf.’ - Ursula K. Le Guin

In Willy Vlautin’s The Night Always Comes, Lynette lives across the road from the Interstate 5 in Portland, with her Mum and her brother Kenny, who has an intellectual disability. She works at a bakery by day and as an escort in the evening, trying to scrape together enough savings so her Mum can get a loan to buy the house they’re currently renting. She’s racing against the tide of gentrification that’s subsuming the city, desperate to secure comfort and security; something she’s only ever found in a peanut butter parfait from Dairy Queen.

These are familiar themes for Vlautin, whose novels focus on characters forced to live on the fringes, desperate for their piece of the American Dream. The cruel system Vlautin writes about is one that forgets so many of its people, where one false step could see you bankrupt, in jail, or dead.

When Lynette’s mum goes out and gets a loan on a new car, it throws the whole plan into jeopardy, sending Lynette on a desperate journey through Portland’s seedy underbelly. She comes across a hard-bitten assortment of ex-cons, thugs, prostitutes, gamblers and addicts. People who are just as desperate as she is. Lynette is forced into one bad choice after another, making you wince on every page.

The Night Always Comes reads like a thriller at points – Vlautin’s writing is propulsive – yet it’s also an important mediation on the state of America today and the effect of Portland’s rapid gentrification on the city’s poor. Condominiums are springing up to the extent that whole neighbourhoods are unrecognisable, warehouse districts now replaced with high-end lofts, restaurants and shops. Vlautin’s eye for detail and his keen ear for dialogue imparts authenticity to the story and elevates it above many other novels of its type. Highly recommended.

Joe Rubbo is the operations manager for Readings.