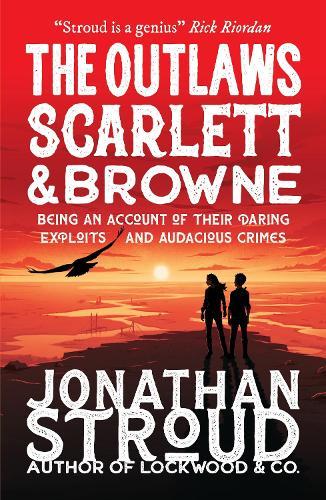 Set in a broken, future England, where gunfights and monsters collide, this is the exciting first title in a phenomenal fantasy teen series by the bestselling children’s novelist.
England has been radically changed by a series of catastrophes - large cities have disappeared and London has been replaced by a lagoon. The surviving population exists in fortified towns where they cling to traditional ways, while strangely evolved beasts prowl the wilderness beyond. Conformity is rigidly enforced and those who fall foul of the rules are persecuted: some are killed, others are driven out into the wilds.
Only a few fight back - and two of these outlaws, Scarlett McCain and Albert Browne, display an audacity and talent that makes them legends.

As a first-time reader of Jonathan Stroud, I am seriously impressed with his style. This is a great Bonnie & Clyde-style outlaw adventure set in a post-apocalyptic England that has become brutal and intolerant.

We first meet kick-ass bank robber, Scarlett McCain, on the job using her superior bank-robbing skills in a remote walled town. During her escape through the harsh forests known as The Wilds, she discovers a blown-up abandoned bus and a solitary survivor, Albert Browne, a young, puppy-ish boy who seems sweet and helpless – or so she thinks. It’s not until they have been chased and nearly captured by people far more dangerous than her usual pursuers that Scarlett realises this boy may have some hidden special powers.

The pair travel across this very different England, robbing a bank along the way to get Scarlett out of debt. They sail along the waterways on a raft owned by an old man and his mute granddaughter and forge an unlikely friendship with them. Scarlett and Browne are searching for the Free Isles, where people with special powers like Albert are reputedly safe from the Faith Houses, religious enclaves that govern the lands and maintain order with an iron fist. But Albert is on the run from someone far worse, a powerful woman who will pursue him to the ends of the earth and will do anything to capture him – dead or alive.

Beautifully written, as well as being genuinely thrilling and action-packed, this is a brilliant start to a new young adult series from Jonathan Stroud. For any readers who like adventure stories and/or dystopia ages 12 and up, this novel will not disappoint.

The True Colour of a Little White Lie

You Don’t Have to Be Everything: Poems for Girls Becoming Themselves