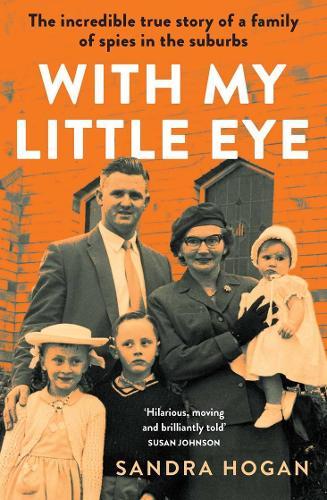 Growing up in the 1950s, the three Doherty children were trained by their parents to memorise car number plates, to spot unusual behaviour on the street, and most important of all, to avoid drawing attention to themselves.
The children became unwitting foot soldiers in Australia’s battle against Soviet infiltration in the Cold War. They attended political rallies, stood watch on houses owned by communist sympathisers, and infiltrated the UFO Society. In 1956 the Doherty family went on a beach holiday with Vladimir and Evdokia Petrov, the famous Soviet defectors, who were hiding from Soviet assassins.
Dudley and Joan Doherty swore their children to secrecy, and for decades, they didn’t even discuss among themselves the work they did for ASIO.
With My Little Eye is a poignant and very funny account of a peculiar childhood in 1950s suburban Australia.
$29.99Add to basket ›

The First Day of Spring

The Most I Could Be: A Renaissance Story

Mother and I: The History of a Wilful Family

END_OF_DOCUMENT_TOKEN_TO_BE_REPLACED

I Am a Girl from Africa

Raceless: In Search of Family, Identity, and the Truth About Where I Belong

The Three Burials of Lotty Kneen