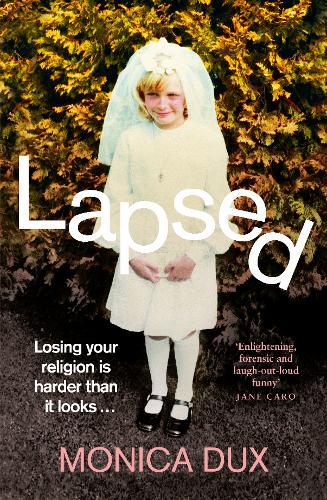 Losing your religion is harder than it looks …
From devout ten-year-old performing the part of Jesus in a primary school play to blaspheming, undergraduate atheist, Monica Dux and her attitude to the Catholic Church changed profoundly over a decade. Ten years on she’d calmed right down and was just ‘lapsed’. Then, on a family trip to Rome, her young daughter expressed a desire to be baptised. Monica found herself re-examining her own childhood and how Catholicism had shaped her. Was it really out of her system or was it in her blood fr life?
In Lapsed, Monica sets out to find the answer. Her investigations lead her to test a miracle cure in Lourdes and to steal from a church. She visits the grave of a headless Saint who claimed to be married to Christ (and wore a wedding ring made of his foreskin to prove it), and speaks to canon lawyers, abuse survivors and even a nun who insists that the Virgin Mary starts her car every morning. She ponders the big questions, such as would Jesus really make a great dinner party guest? And, far more seriously, given what she now knows about clerical abuse and its extent, is it enough to turn her back on the Church, or did she have a deeper, more enduring obligation?
With the wry humour of David Sedaris and the razor-sharp observations of Nora Ephron, Lapsed is the story of one woman’s attempt to exorcise her religious upbringing, and to answer the question, is Catholicism like a blood group and, if so, is it possible to get a total transfusion?

Monica Dux is a funny woman. Thank God, because in Lapsed she is taking on the world by examining the Catholic way of life from all angles. Dux does what so many good feminist writers do: she makes the personal political. Starting with her own experiences with the church, Dux looks around, peers under stones and contemplates her role within the ‘Great Catholic Church’. Her personal approach gives readers insight into the complexities of Catholic life, but it also allows Dux’s humour to shine. It is that layer of self-deprecation that gives this examination its heart and soul.

Dux begins her story of leaving the Catholic Church by regaling us with her memories of childhood. She talks about the plays, the hymns and her Catholic childhood milestones as well as her daily prayer rituals. As she throws her net wider, she examines her relationship with religion as a parent. She travels overseas with her family to further investigate the impact of the Catholic Church on her own way of childhood. She is not afraid to address the anger and hurt caused by the Church. Likewise, she does not steer away from examining some fairly extreme religious practices.

Lapsed is a personal story that is an easy read. It is Monica Dux’s own story of how to be free from religious dogma. With a light touch, she scrutinises every part of her history and owns her own contradictions. This is a brave book, and Dux uses humour and her relentless intellectual curiosity to protect the reader and herself. She owns every part of the story and she finishes her acknowledgements with a sense of freedom. And as she says, ‘that’s just as it should be’.