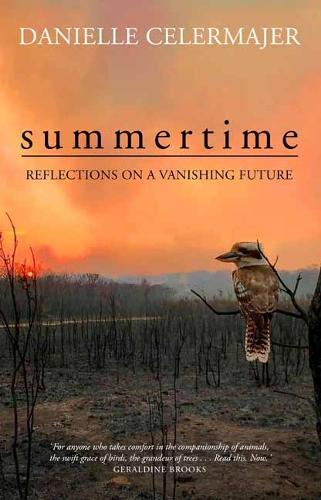 I went and sat alone where Jimmy has been lying. It is way down in the bush. The light is soft, the air and the earth are cool, and the smell is of leaves and the river. I cannot presume to know what he is doing when he lies here, but it seems that he is taking himself back to an ecology not wrought by the terror of the fires, not fuelled by our violence on the earth. He is letting another earth heal him.
Philosopher Danielle Celermajer’s story of Jimmy the pig caught the world’s attention during the Black Summer of 2019-20.
Gathered here is that story and others written in the shadow of the bushfires that ravaged Australia. In the midst of the death and grief of animals, humans, trees and ecologies Celermajer asks us to look around - really look around - to become present to all beings who are living and dying through the loss of our shared home.
At once a howl in the forest and an elegy for a country’s soul, these meditations are lyrical, profound and heartbreaking.

In January of 2020, at the height of what has come to be known as Black Summer, Danielle Celermajer wrote an article about Jimmy the pig. Celermajer lives on a property in rural New South Wales where she provides refuge for an eclectic assortment of animals. Jimmy and Katy were two pigs who had been left to die on the floor of a factory farm. They had been together through their traumatic beginning and stayed side by side in an animal sanctuary before making their way to Celermajer’s property to spend the rest of their days in each other’s company.

In December 2019, the unprecedented size and scale of the bushfires that surrounded Celermajer’s home forced her to move the animals to another property where she had hoped they would be safer. Despite the move, Katy died. When Jimmy returned to Celermajer he was consumed by grief and he searched constantly for Katy. Then one day he just stopped, lay down on the ground and did not get up. This article became the basis for Summertime, a moving and personal reflection on the overwhelming devastation of uncontrolled bushfire in a changing climate.

Celermajer is a Professor of Sociology and Social Policy at the University of Sydney and she lends her academic and philosophical eye to a challenging analysis of not only the human tragedy but also of the impact on the animals who suffered so brutally. But it is her personal experience of living on the land and her relationships with the animals who share her home that makes this a compelling reading experience.

For now the pandemic seems to have eclipsed the urgency for real change that was felt in the aftermath of Black Summer, but this book is the important reminder we all need of the devastating effects of climate change and the unparalleled scale of the trauma inflicted on the land and all its inhabitants.

Kara Nicholson is a part of the Readings online team.

Stories written in the shadow of the bushfires that ravaged Australia.