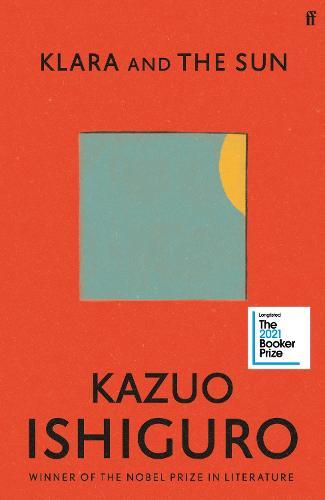 From the bestselling and Booker Prize winning author of Never Let Me Go and The Remains of the Day, a stunning new novel - his first since winning the Nobel Prize in Literature - that asks, what does it mean to love?

This is the story of Klara, an Artificial Friend with outstanding observational qualities, who, from her place in the store, watches carefully the behaviour of those who come in to browse, and of those who pass in the street outside. She remains hopeful a customer will soon choose her, but when the possibility emerges that her circumstances may change for ever, Klara is warned not to invest too much in the promises of humans.
A thrilling feat of world-building, a novel of exquisite tenderness and impeccable restraint, Klara and the Sun is a magnificent achievement, and an international literary event.

In Klara and the Sun Kazuo Ishiguro returns to dystopian terrain, much like his earlier, and most well-known novel, Never Let Me Go. As in Never Let Me Go, Ishiguro has once again created a world that is futuristic, lonely and strange. Ishiguro’s distinctly understated style makes this unsettling world seem oddly familiar, leaving the reader feeling comfortably uncomfortable.

When we first meet our narrator, Klara, she is brand new. Her experience of the world is limited to the store that sells her, and the limited view of the street through the front window. The only human she interacts with regularly is Manager, and her only friend is a fellow AF, Artificial Friend, named Rosa. They are both on display, waiting for a child to come in, choose them and take them home.

Day by day, Klara uses her incredible perceptive powers to analyse and build an understanding of the world around her. But at the same time, she is incredibly naïve, and this dichotomy makes for an intriguing narrator. Ishiguro subverts the common sci-fi convention that AI would be an unsympathetic force – the possible end to humanity. Instead, Klara is a delicate creature.

She is eventually plucked from the shop floor by Josie, a young girl who lives with her mother Helen. Josie is sick with an undisclosed illness, but we know it’s linked to the troubled state of the world and the growing class divide. It is Klara’s job to be her friend and protector, which Klara takes on with unwavering dedication. As Josie’s illness worsens, her family contemplate a harrowing plan in which Klara finds herself the centrepiece.

The reader is left to do a lot of satisfying work in this story, as details are eked out in snatches of conversation and glimpses of action that are never quite fully understood by Klara. The mechanics of the narrative form illustrate Ishiguro’s mastery and his ability to control and subvert the reader’s expectations in unsettling ways.

END_OF_DOCUMENT_TOKEN_TO_BE_REPLACED

The Vixen: A Novel

END_OF_DOCUMENT_TOKEN_TO_BE_REPLACED

China Room: The heart-stopping new novel from the Booker-shortlisted author of The Year of the Runaways