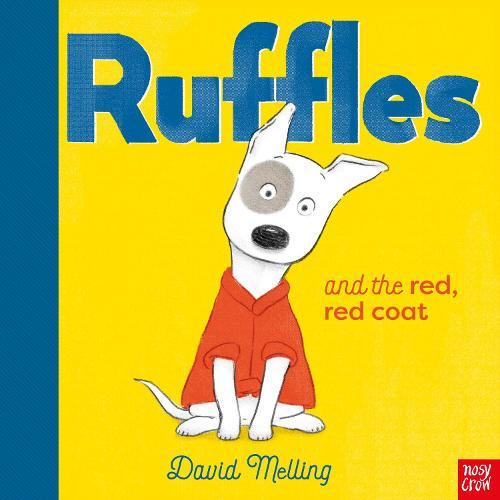 Ruff! Ruff! Hello, Ruffles! Ruffles is a typical toddler who experiences all the highs and lows of preschool life as he learns about the world around him.
There are lots of things he likes … and lots of things he doesn’t! He LOVES scratching, digging and chewing but he does NOT like wearing his coat on rainy days. No, no, no, no, NO! But when Ruffles wants to splash in puddles with his best friend, Ruby, he soon learns that some things are definitely worth wearing your coat for!
With brilliantly observed and hilarious animal illustrations by David Melling, whose series, Hugless Douglas, has sold over 5 million copies worldwide.

Ruffles is an adorable dog who loves doing all the familiar doggy things like playing, chewing and fetching, but there is one thing he does not care for and that is his new red coat – ugh! How will he get it off? Thankfully, one thing he does like is puddles and playing in them with his best friend Ruby, who does wear her coat. Maybe, just maybe, she can encourage Ruffles to wear his.

As with his bestselling book Hugless Douglas, David Melling’s combination of charming illustrations and simple story once again proves to be a winner. Ruffles and the Red, Red Coat is sure to be a favourite with little readers 18 months and up.

END_OF_DOCUMENT_TOKEN_TO_BE_REPLACED

If I Had An Octopus