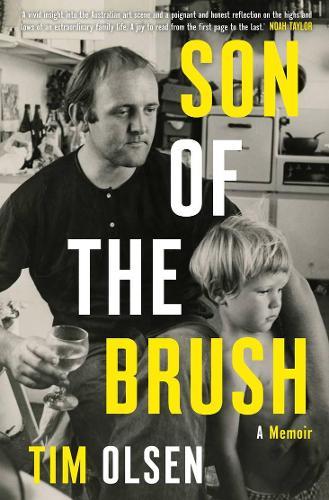 Tim Olsen is the son of arguably Australia’s greatest living artist, Dr John Olsen. Son of the Brush is his fascinating, candid memoir of what it was like to grow up in the shadow of artistic genius, with all its wonder, excitement and bitter disappointments.

Tim’s childhood was dominated by his father’s work, which took the family to Europe and to communities around Australia as John sought inspiration and artistic fellowship. Wine, food, conversation and the emerging sexual freedom of the 1960s wove a pattern of life for the family. It was both the best and worst of childhoods, filled with vibrancy and stimulation, yet fraught with anxiety and eventual sadness as John separated from Tim’s mother Valerie and moved away from the family.

The course of Tim’s life has been set by the experiences of his childhood, and by the passion for art he inherited from both his parents (his mother was an acclaimed painter in her own right). Art has always been at the very centre of Tim’s world, although he has followed a different path from his parents. Having overcome and recovered from addiction, Tim is today one of Australia’s most respected art dealers, with a knowledge of art and artists forged from what is literally a lifetime immersed in the art world. Son of the Brush is a memoir about a son and his father, and what it takes to forge your own identity and chart your own course in life, but it is also about the wider world of art, artists and the joy, inspiration and sacrifices of the creative life.

END_OF_DOCUMENT_TOKEN_TO_BE_REPLACED

You’ve Got To Be Kidding