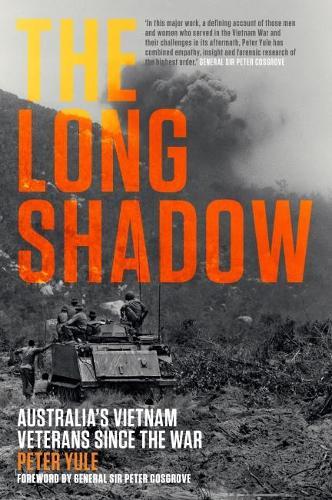 ‘Most  veterans were either alcoholics or workaholics and I fitted into the latter  category.’ - Chris Cannin (6RAR, 1967; 7RAR, 1967-68)
‘When I look back and I see what I used to do … there were a lot of things wrong that I would never ever admit to at the time … I thought I was fine, but I wasn’t.’ - Alan Thornton (17 CONSTRUCTION SQUADRON, 1968-69)
The medical and psychological legacies of the Vietnam War are major and continuing issues for veterans, their families and the community, yet the facts about the impact of Agent Orange, post-traumatic stress disorder and other long-term health aspects are little understood. The Long Shadow sets the record straight about the health of Vietnam veterans and reveals a more detailed and complex picture.
Profiling the stories of the veterans themselves, this comprehensive and authoritative book is a pioneering work of history on the aftermath of war. It takes a broad approach to the medical legacies, exploring the post-war experiences of Vietnam veterans, the evolution and development of the repatriation system in the post-Vietnam decades and the evolving medical understanding of veterans' health issues.
$49.99Add to basket ›

Stonefields by the Seasons