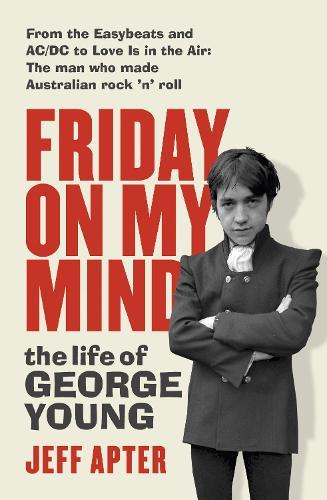 George Young wasn’t so much on the charts for the best part of three decades: he and his musical partner Harry Vanda were the charts.
George’s journey began with the trailblazing Easybeats and continued, alongside Harry, as producer/songwriter for hire with John Paul Young, The Angels, Rose Tattoo, Cheetah, Ted Mulry, Stevie Wright and, most crucially, AC/DC. George and Harry also struck gold with Flash and the Pan, almost by accident.
George Young helped create such classics as ‘Friday on My Mind’, ‘Sorry’, ‘Love is in the Air’, ‘Evie’, ‘Yesterday’s Hero’, ‘Down Among the Dead Men’, ‘Hey, St. Peter’, ‘Bad Boy for Love’, ‘Jailbreak’ and ‘It’s a Long Way to the Top’. In 2001, APRA voted ‘Friday on My Mind’ the best and most significant Australian song of the past 75 years.
In this long-overdue book, the first to focus exclusively on the life and work of George Young, writer Jeff Apter explores George’s long and fruitful association with Harry; his rare ability to maintain a stable married life with his wife Sandra; and his handshake deal with Ted Albert that helped create a music empire. The book also reveals such little-known events as the accident that almost killed off ‘Hey, St. Peter’ before its release, and the tragedy that bonded George and Harry for life.
$29.99Add to basket ›