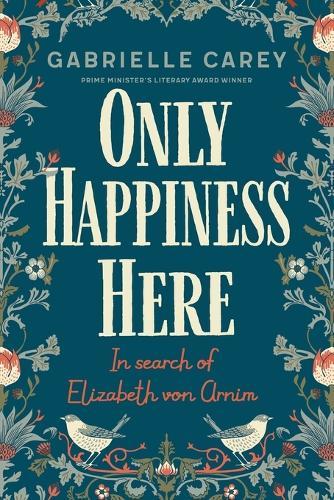 ‘When I discovered Elizabeth von Arnim, I found, for the first time, a writer who wrote about being happy.’
Elizabeth von Arnim is one of the early 20th century’s most famous - and forgotten -authors. Born in Sydney in the mid 1800s, she went on to write many internationally bestselling novels, marry a Prussian Count and then an English Lord, nurture close friendships with H.G. Wells and E.M. Forster and raise five children. Her novels were ahead of their time in their representation of women and their pursuit of happiness.
Intrigued by von Arnim’s extraordinary life and vibrant career, Gabrielle Carey sets off on a literary and philosophical journey to know more about this talented author. From the Prime Minister’s Literary Award winner of Moving Among Strangers, Only Happiness Here is part biography, part memoir and part reflection on human nature’s obsession with finding joy.

‘I think I’ve so got into the habit of being happy inside and quite secretly …’ So wrote Elizabeth von Armin in her diary, in the year before her death, according to Gabrielle Carey in her new memoir and biography Only Happiness Here. The memoir is Carey’s, the biography von Armin’s. Only Happiness Here weaves together Carey’s emergence from a devastating personal time into a period of some peace and equilibrium as she turns to writing the biography of von Armin, an author relatively forgotten now.

Von Armin wrote twenty-one books in the last decade of the nineteenth century and the first half of the twentieth century. In her lifetime, she was a bestselling author, feted by readers and critics alike. Born in Sydney, she spent most of her life in Europe. Her cousin was Katherine Mansfield. One of her lovers was H.G. Wells. She married twice: a German count and an English earl. She employed E.M. Forster. She lived in more than thirty houses, many of which she built. She had five children, and fourteen dogs over the course of her life.

She was happy. Von Armin records her happiness often in her diaries and her novels. It’s a happiness Carey dearly wants to learn from and find. In von Armin’s diaries, it’s a happiness of the moment, coming after her weather report, recorded as a similar observation on the state of being in the day. For her readers, it’s a joy found through her novels, books that had made Carey laugh on first reading. This time Carey would read them for understanding as well as pleasure.

Carey comes to one conclusion in her search that touched me deeply: von Armin was able to demonstrate happiness through her work. In exploring this observation, Carey is pointing not to prescriptions for behaviour to invoke happiness, but, rather, to von Armin’s ability to embody feeling with a light touch. With a deftness I can only read about, von Armin invokes the happiness and subversion to be found in one’s own actions: ‘If I could only dig and plant myself! … I did one warm Sunday … And run back very hot and guilty into the house and get into a chair and behind a book and look languid just in time to save my reputation …’